Pasola, a matter of life and death

Pasola, a matter of life and death

Staff and students recently had the opportunity to experience the traditional Pasola Festival which is most popular in Southwest and West Sumba Regencies. It was quite an unforgettable cultural experience.

According to legend, Pasola originated when a beautiful woman in a village in Southern Sumba remarried her new lover from a village in Western Sumba because she believed that her husband had died in the ocean when he went fishing for an extended period. Eventually, her husband returned and a war between these two tribes could not be avoided. In an attempt to end the conflict, the woman chose to sacrifice herself by jumping into the ocean. When she jumped into the ocean she transformed into “Nyale” (a sea worm) that often emerges in the soil today and determines the dates when Pasola will be held each year. For the Sumbanese people, Pasola is part of the local religious belief called Marapu. In this faith, Pasola is held to thank their ancestors for a successful harvest and ensuring future prosperous rice harvests. 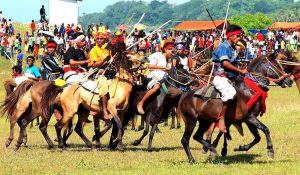 (Blood)bonding for staff and students

The human and horse shed blood during Pasola are believed to be a symbol of fertility and also commemorates the bond of brotherhood between tribes that formed as a result of the sacrifice. It was a wonderful cultural experience for our staff and students. Don’t worry, we are all alive and well…